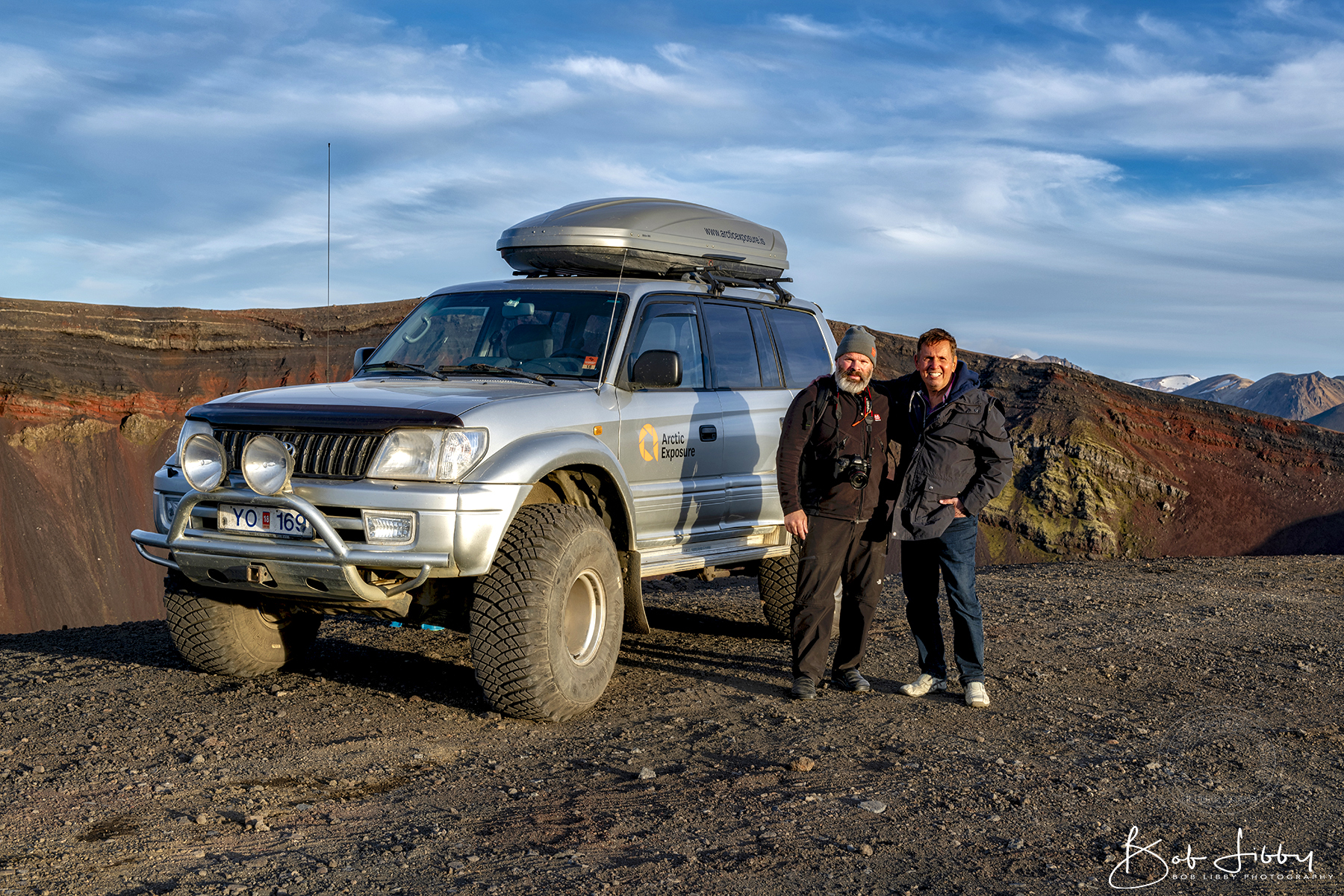 Dianne and I spent 10 days in Iceland with our Icelandic photography mate, Skarpi Thrainsson owner of “Arctic Exposure”. He showed us the sights and sounds of Iceland and guided us to photographic sights that depicted Iceland’s rich and vibrant culture. Ten days were not enough for this enjoyable adventure, but you don’t have to go far to discover amazing nature and beautiful scenery. There are so many sights to see in Iceland – and so many things to do. Skarpi’s Arctic Exposure tours will make sure your sights are seen in a safe, fun and in an enlightening way. 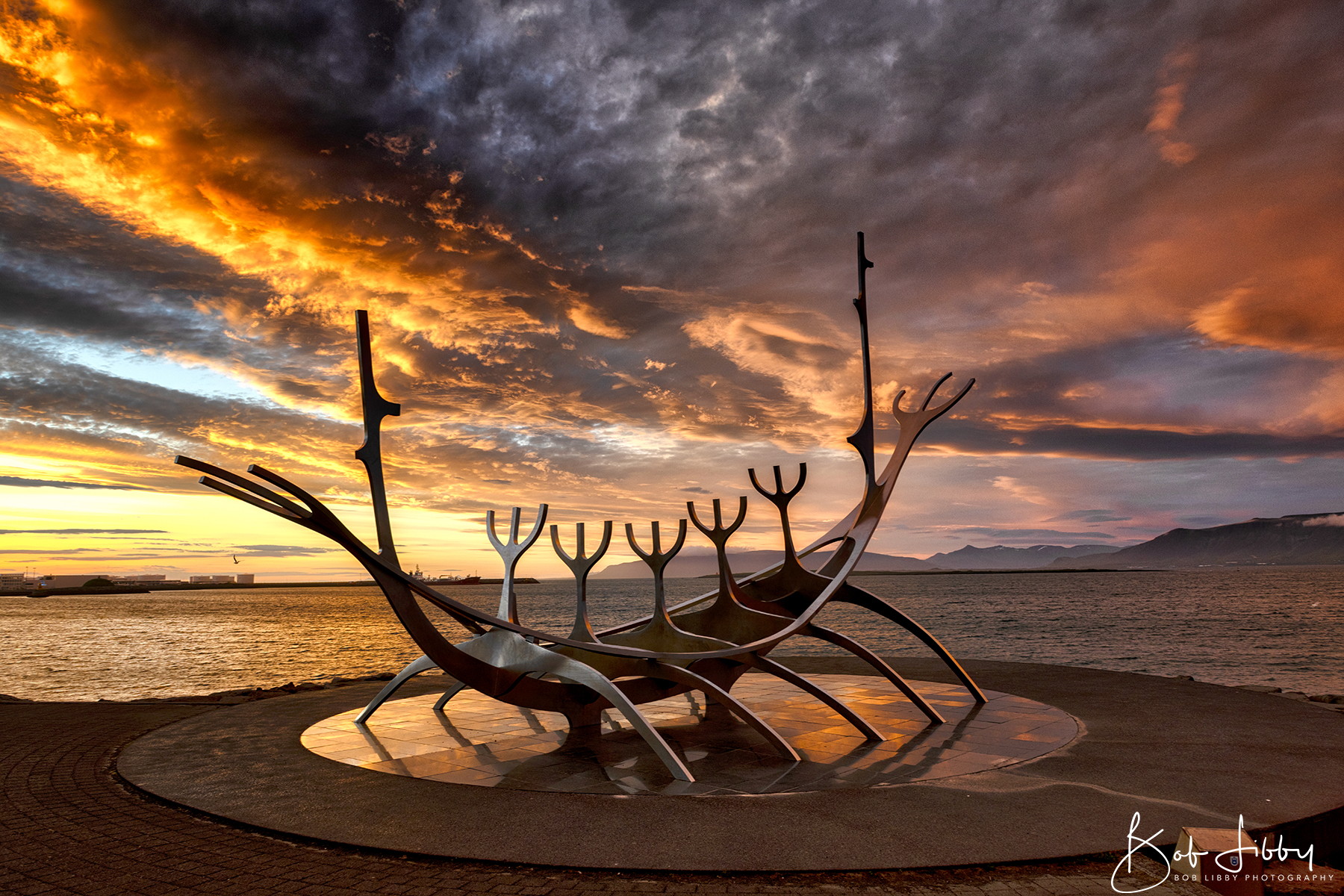 This gleaming steel sculpture is located on Reykjavik’s beautiful waterfront and resembles a Viking long-ship. It is called the ‘Solfar’ or ‘Sun Voyager’. The striking landmark was created by Icelandic sculptor Jon Gunnar Arnason. The sculpture is described as a dreamboat, or an ode to the sun. The artist intended it to convey the promise of undiscovered territory, a dream of hope, progress and freedom. Photographic sunsets were hard to come by during our 10 day trip in Iceland. This is one of the rare ones. This photo and the one below was taken on our first evening in Reykjavik. 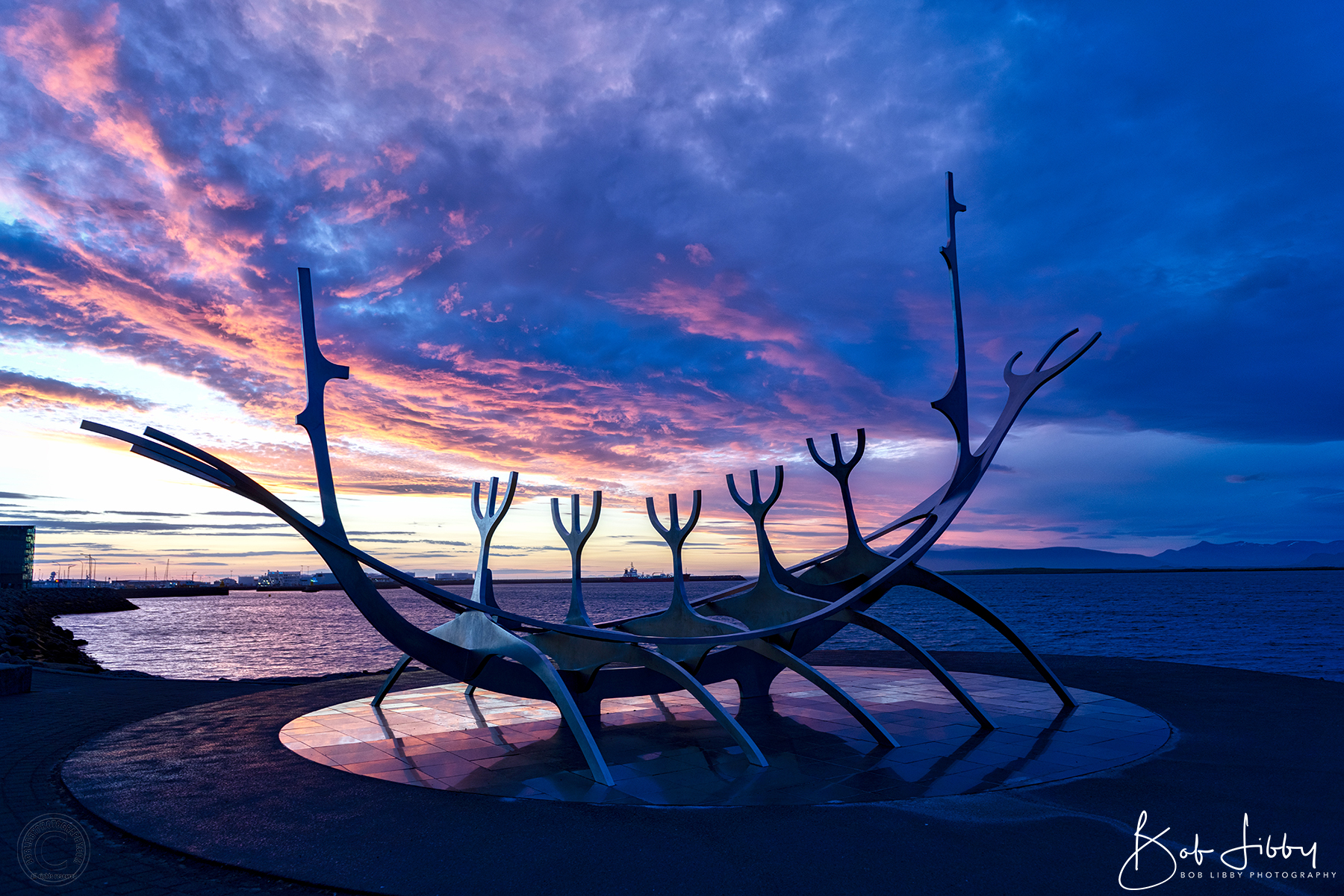 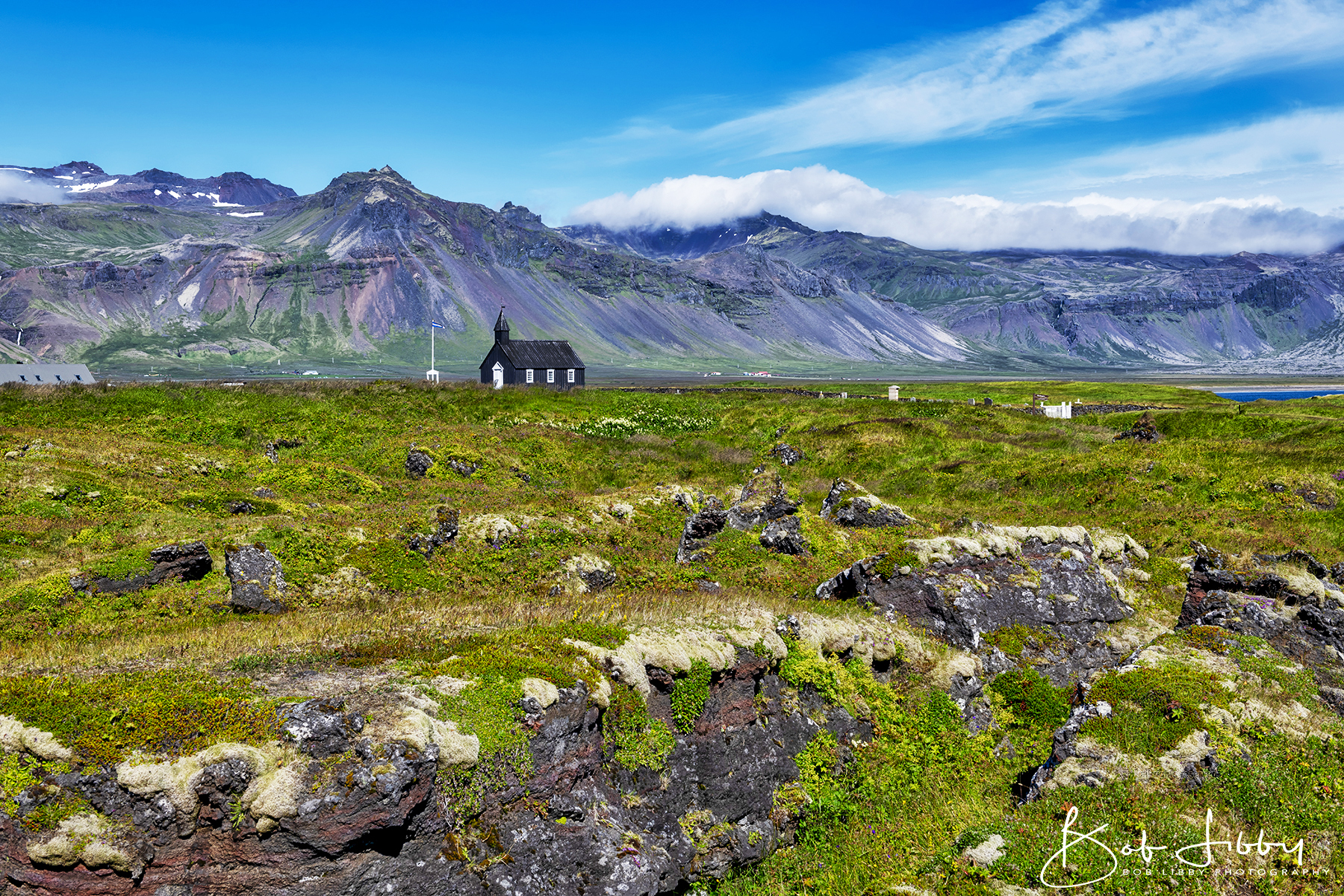 This black church sits alone among a field of lava rock on the south coast of Iceland’s Snæfellsnes Peninsula, there’s a village with only a hotel and a tiny black church called the Búðakirkja. Another one of my first photo taken in Iceland. The conditions didn’t always give me the best of photo opportunities. I also had to put up with avoiding tourists which didn’t help with many of my shots. However, this photo and the one below were mostly void of tourists.

This Iceland scene was photographed on the South coast of Iceland’s Snæfellsnes Peninsula, in the same area as the black church. It shows a lava field, a volcanic mound and a waterfall. It is estimated there are around 10, 000 waterfalls in Iceland. 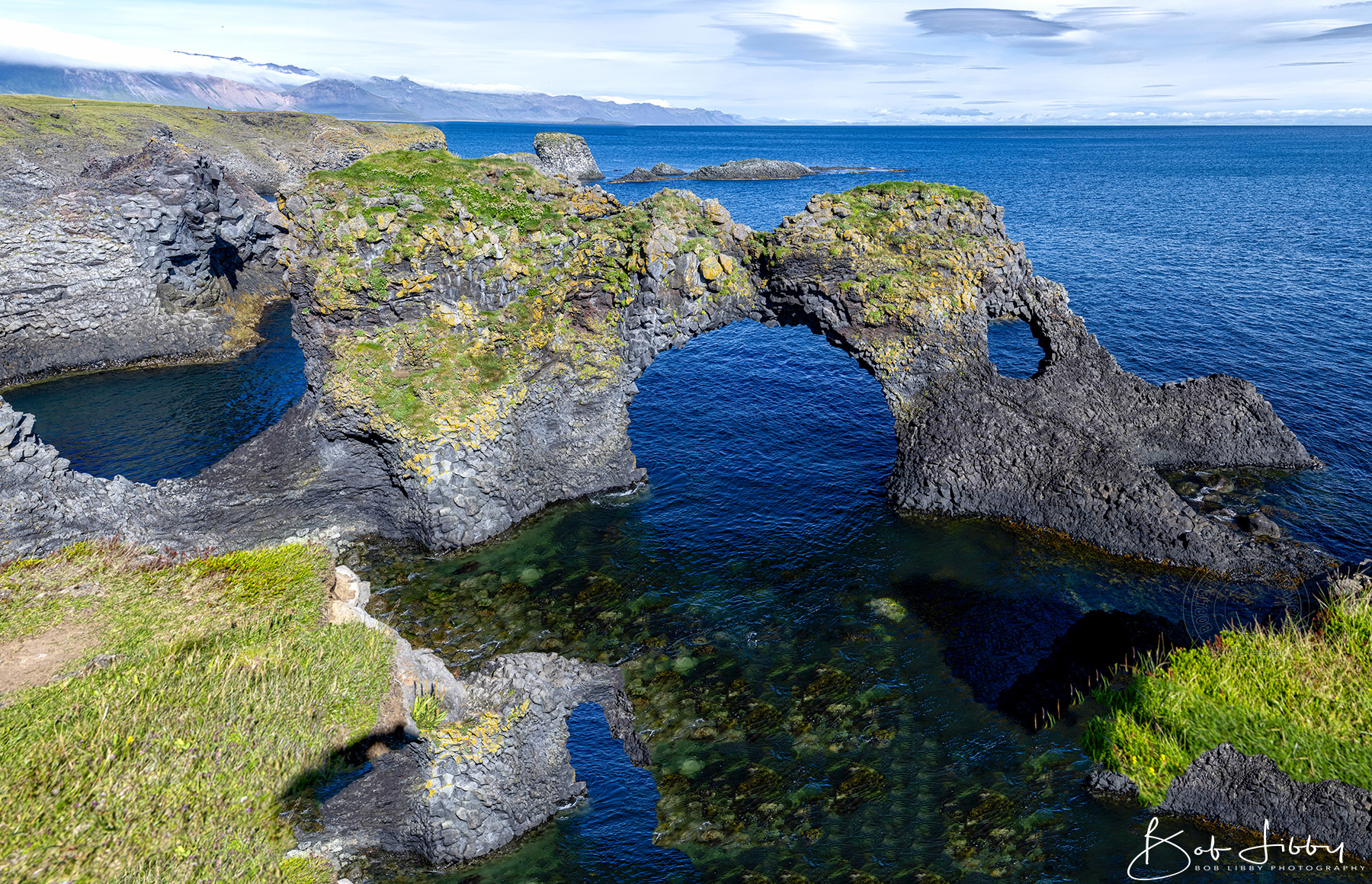 The rocky cliffs of Lóndrangar on the Snæfellsnes peninsula, are a pair of rock pinnacles in Iceland. They are volcanic plugs of basalt, that have been hewn out over many years by erosion. 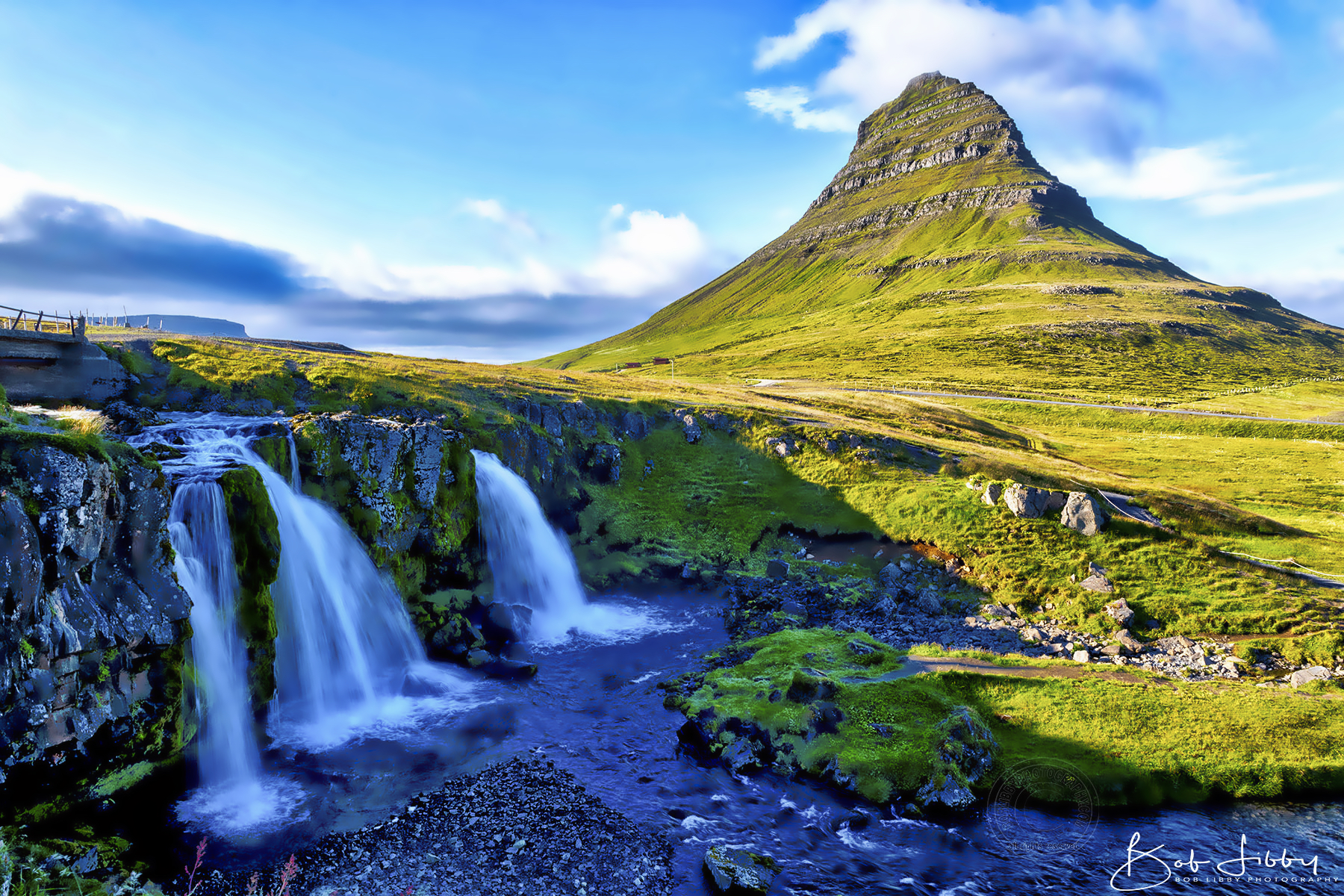 Located on the south coast of Iceland’s Snæfellsnes Peninsula, Mt. Kirkjufell and the Kirkjufellsfoss waterfall have become the most popular place for a photo in Grundarfjörður, Iceland – but be prepared to fight the tourists as I considered myself lucky to have taken this photo. I was with Sharpi Thrainsson and it was about 5 in the afternoon when this photo was taken. 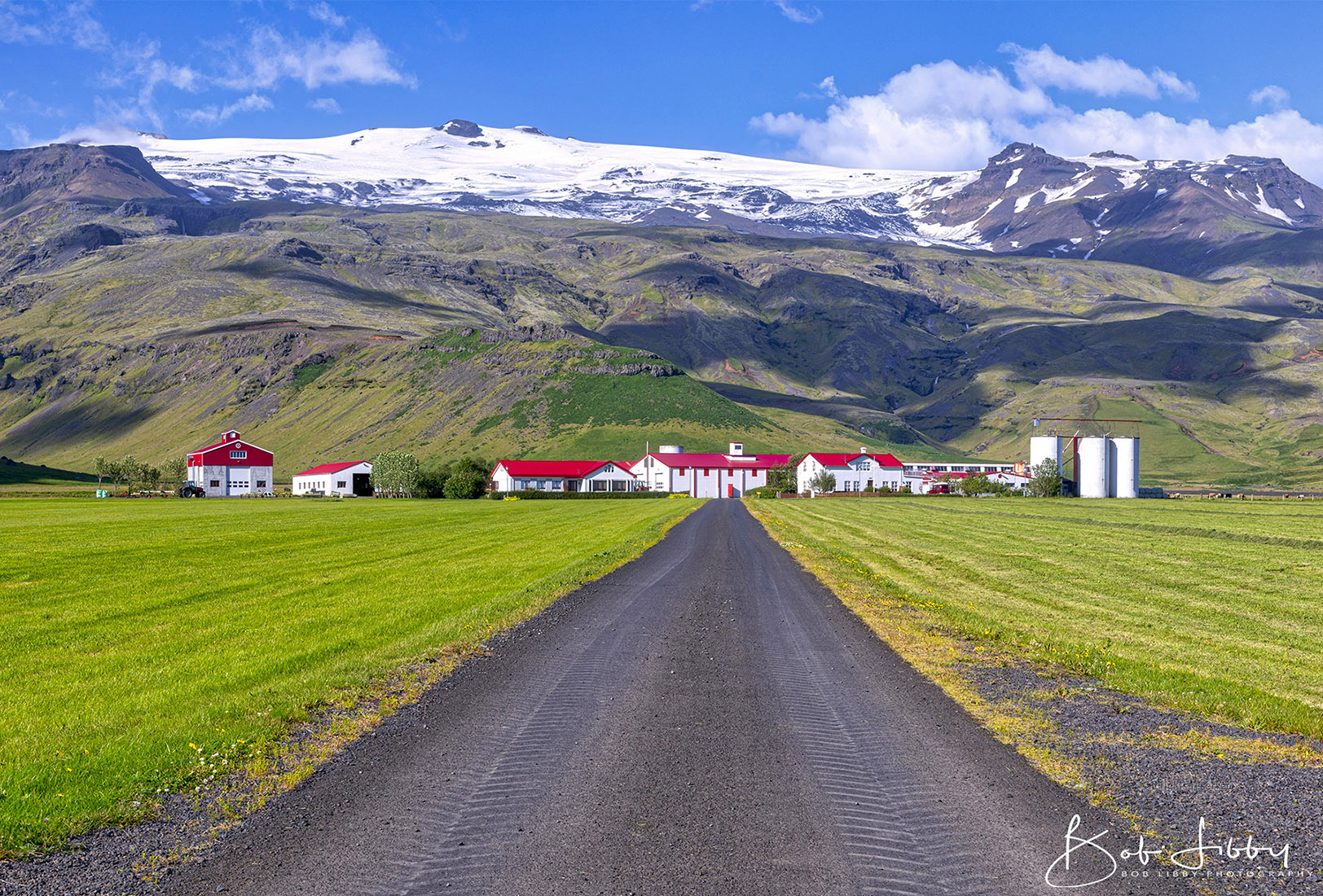 On average an eruption occurs in Iceland every 4 years.The latest large eruption that occurred in Iceland was in 2010, on Fimmvorduhals and in the Eyjafjallajokull glacier as shown here. It caused travel chaos with air travel to Europe. 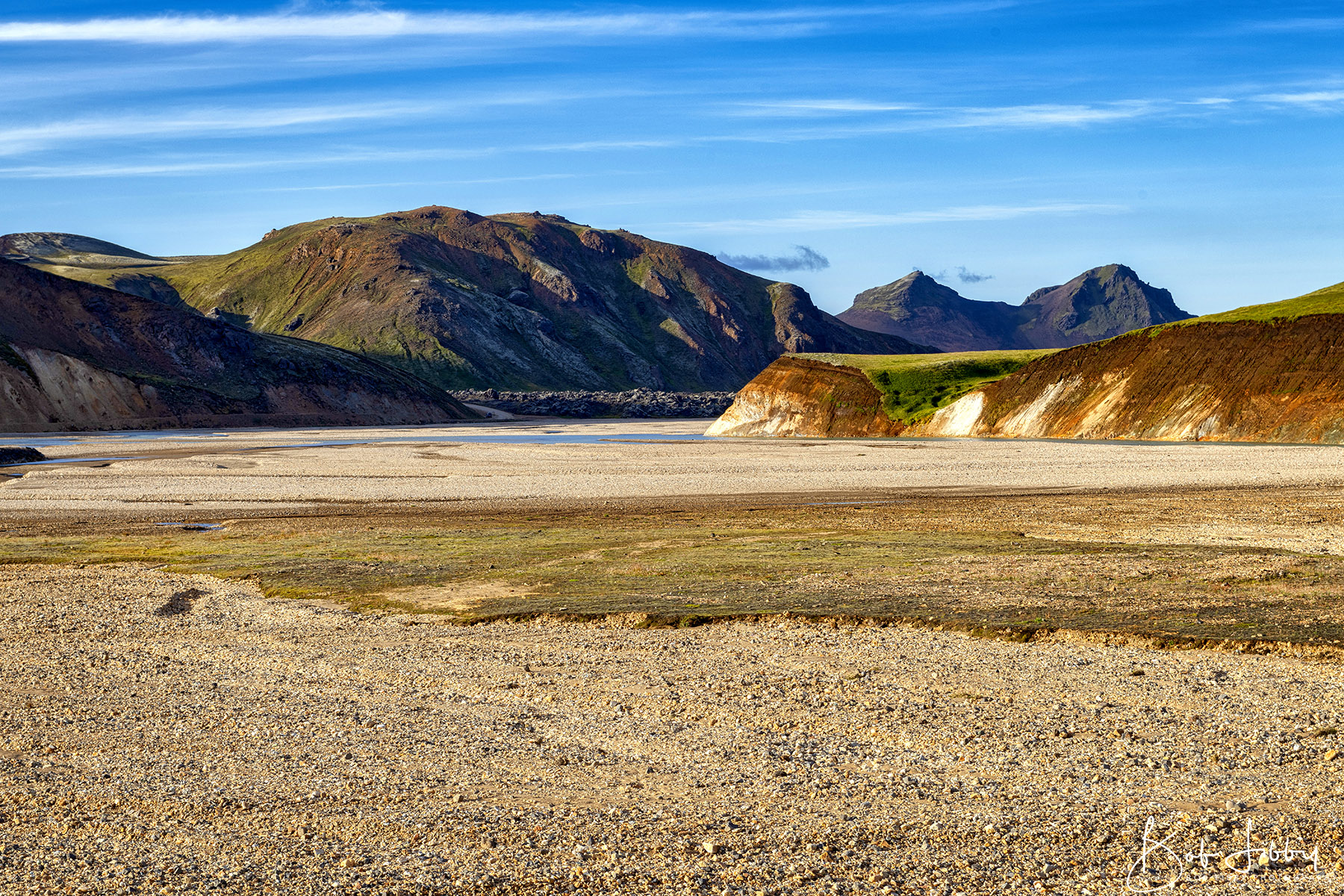 Landmannalaugar is a truly rare area, both geologically and aesthetically. The dramatic region can be found nestled beside the raven-black Laugahraun lava field, a sweeping expanse of dried magma which originally formed in an eruption in 1477. The Icelandic Highlands is an uninhabited land as it is rough, raw and wild. That is exactly why this region holds so many breathtaking natural wonders they cannot be compared to anywhere else. From colored mountains to rugged, otherworldly like terrains. 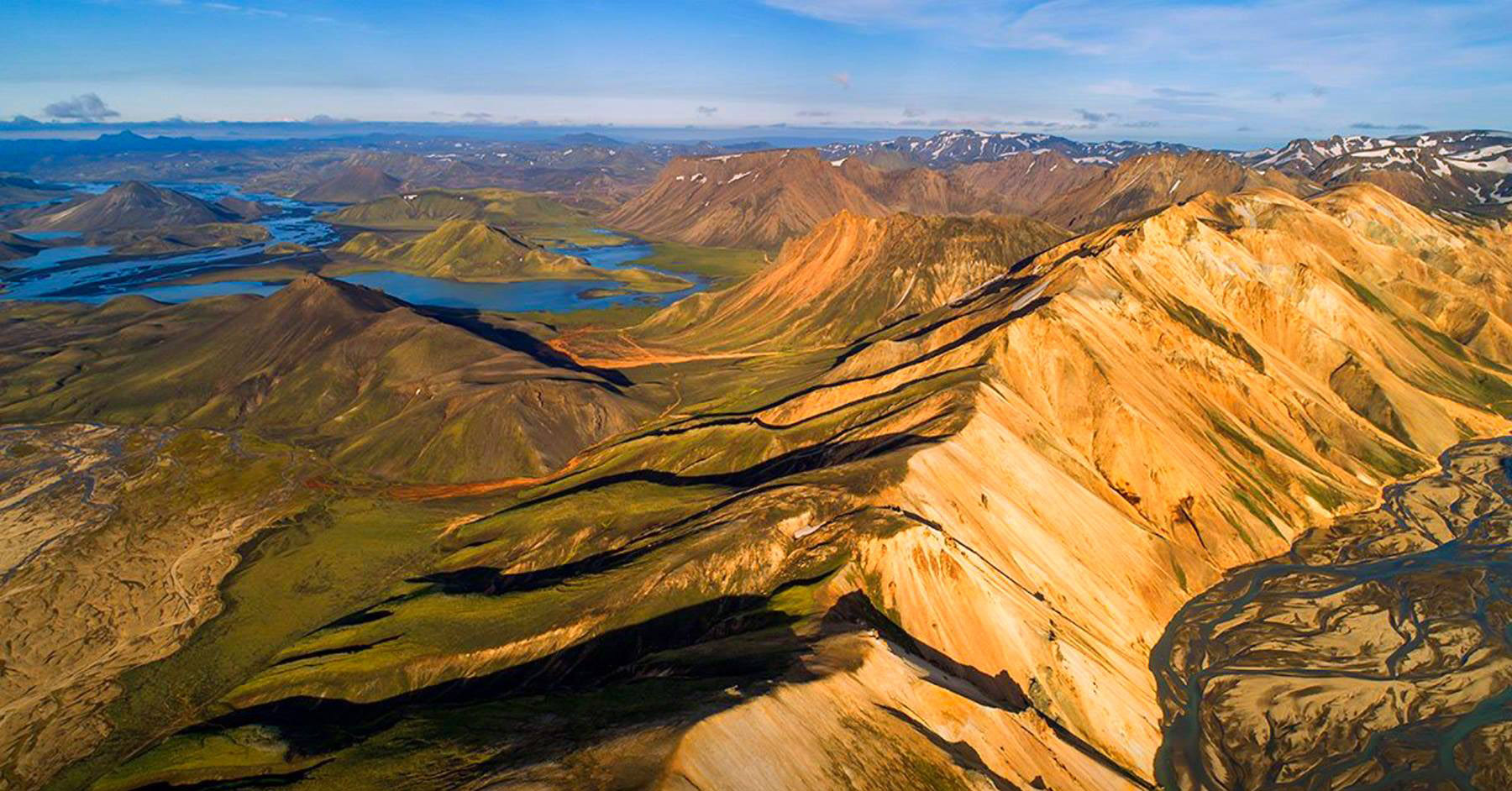 I was introduced to Drone photography while in Iceland by Skarpi Thrainsson. He took this photo while up in the Southern Highlands. I believe it was about 5 kms away from where we first launched the drone 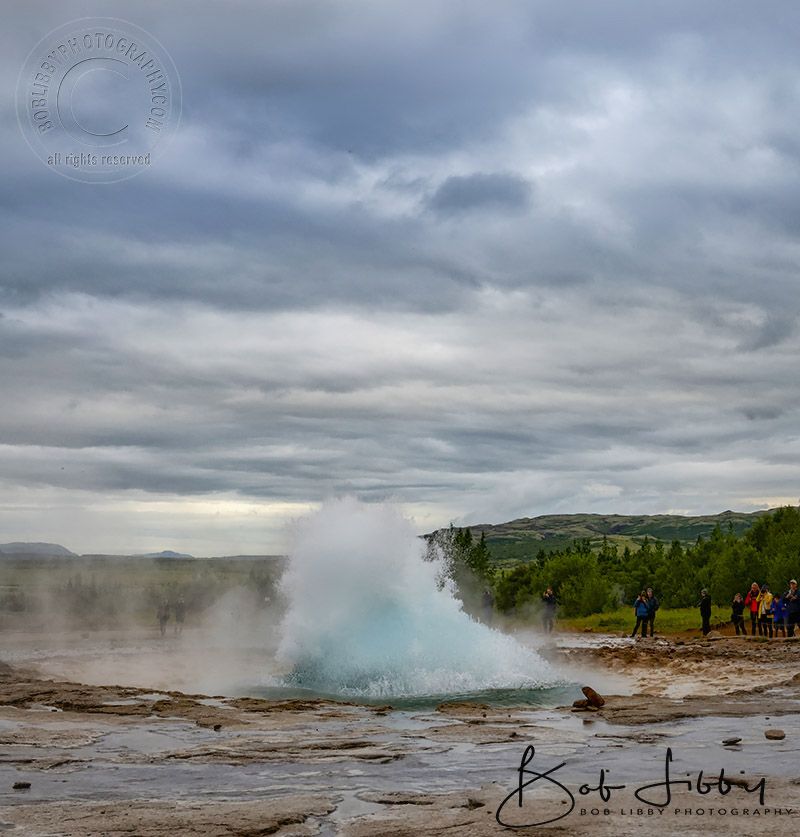 A favorite stop along the Golden Circle is the highly active Geyser Hot Spring Area with boiling mud pits, the exploding Strokkur ( The Great Geyser ) which spouts water 30 metres (100 ft) into the air every few minutes. After shooting the video I took six continuous photos showing the various stages of the eruption. This photo shows stage two of the eruption. If the wind is right and you get too close, expect a hot to warm shower. 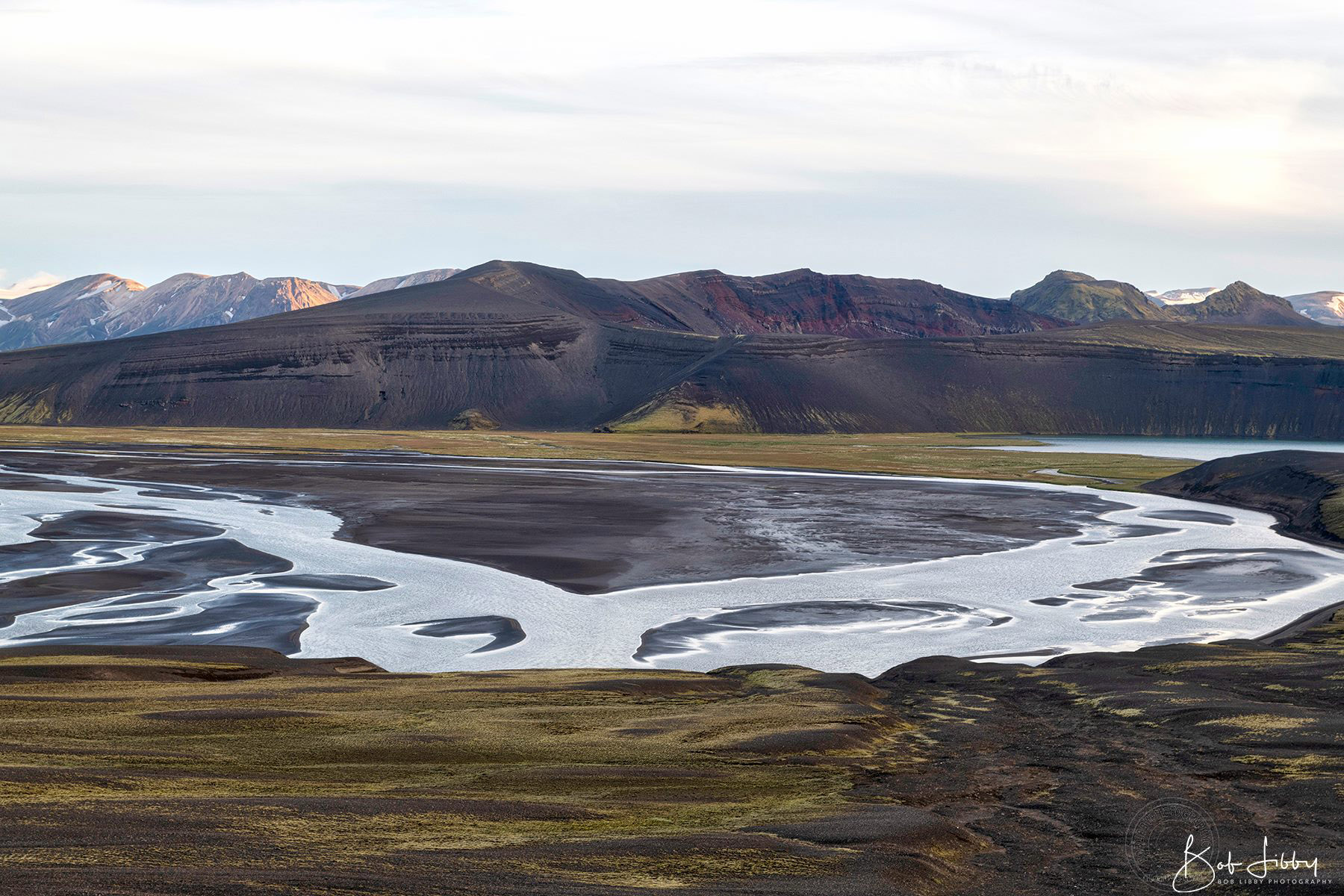 Skógafoss is one of the biggest waterfalls in Iceland, with a drop of 60 meters and a width of 25 meters, and you can walk right up to the falls, but be prepared to be drenched. It is just overwhelming standing next to it. Seeing that it produces a lot of drizzle then you will be able to see beautiful rainbows on sunny days. And, Yes – There are a lot of tourists and if photographing expect to get wet. 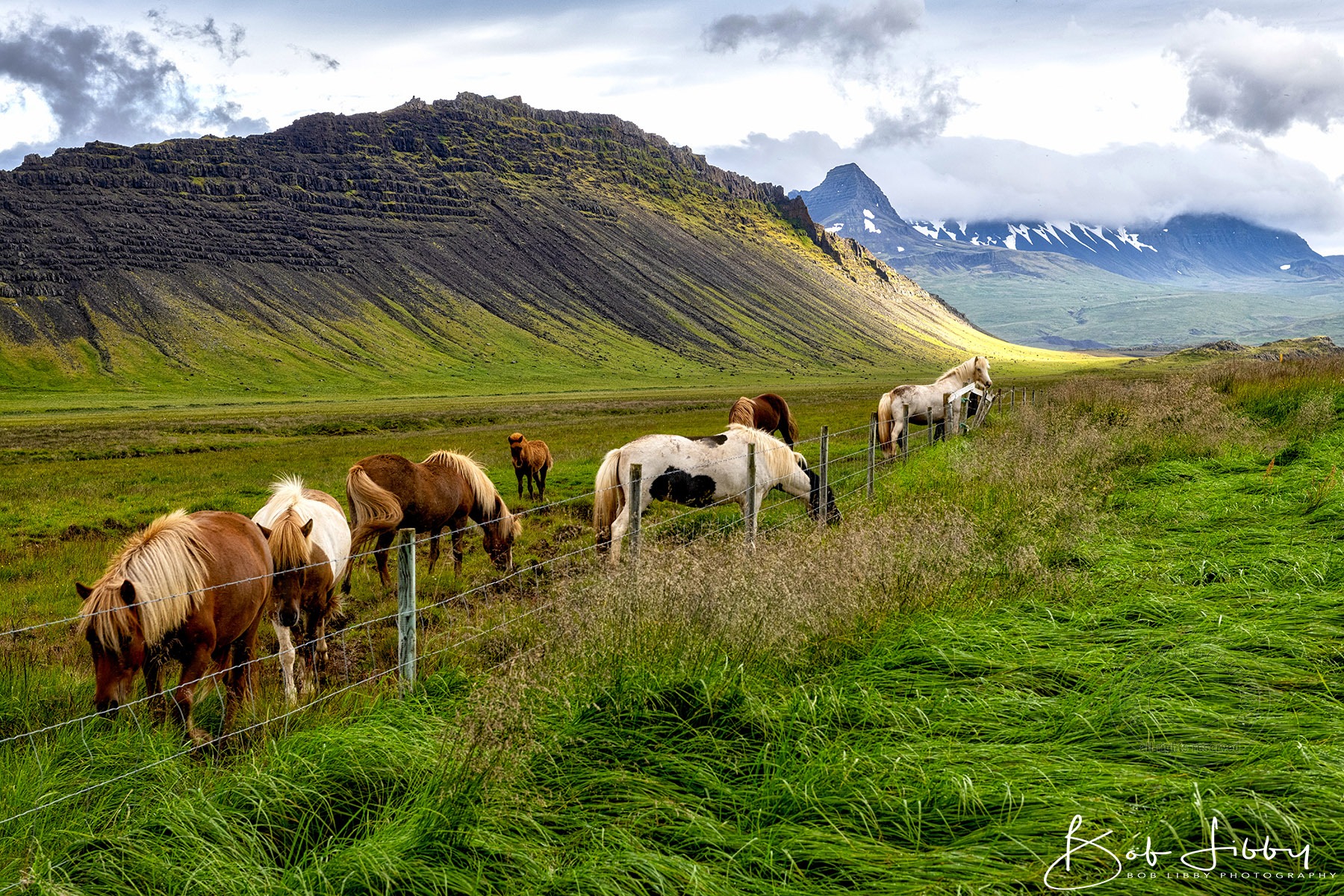 No trip to Iceland is complete without seeing the legendary Icelandic Horse. Brought to Iceland by the Vikings in the 9th and 10th centuries, the Icelandic Horse is one of the oldest breeds of horse in the world. No other horse is allowed in the country and when a horse is exported from Iceland, it is not allowed back in. It is the only breed of horse allowed in Iceland.

The canyon Sigöldugil used to be filled by the river Tungnaá. Most of the water from the lake Krókslón is now forced into conducts to the power plant. But the canyon is still there for our pleasure and the overflow of Krókslón lake. I have heard three names on these waterfalls, Fögrufossar, Hrauneyjafossar and Lekafossar. This canyon can be great for photography at the right time of day. But when on a short holiday you have to shoot the conditions of the day. This photo was taken in the late evening and I was hoping for a spectacular sunset which never came. 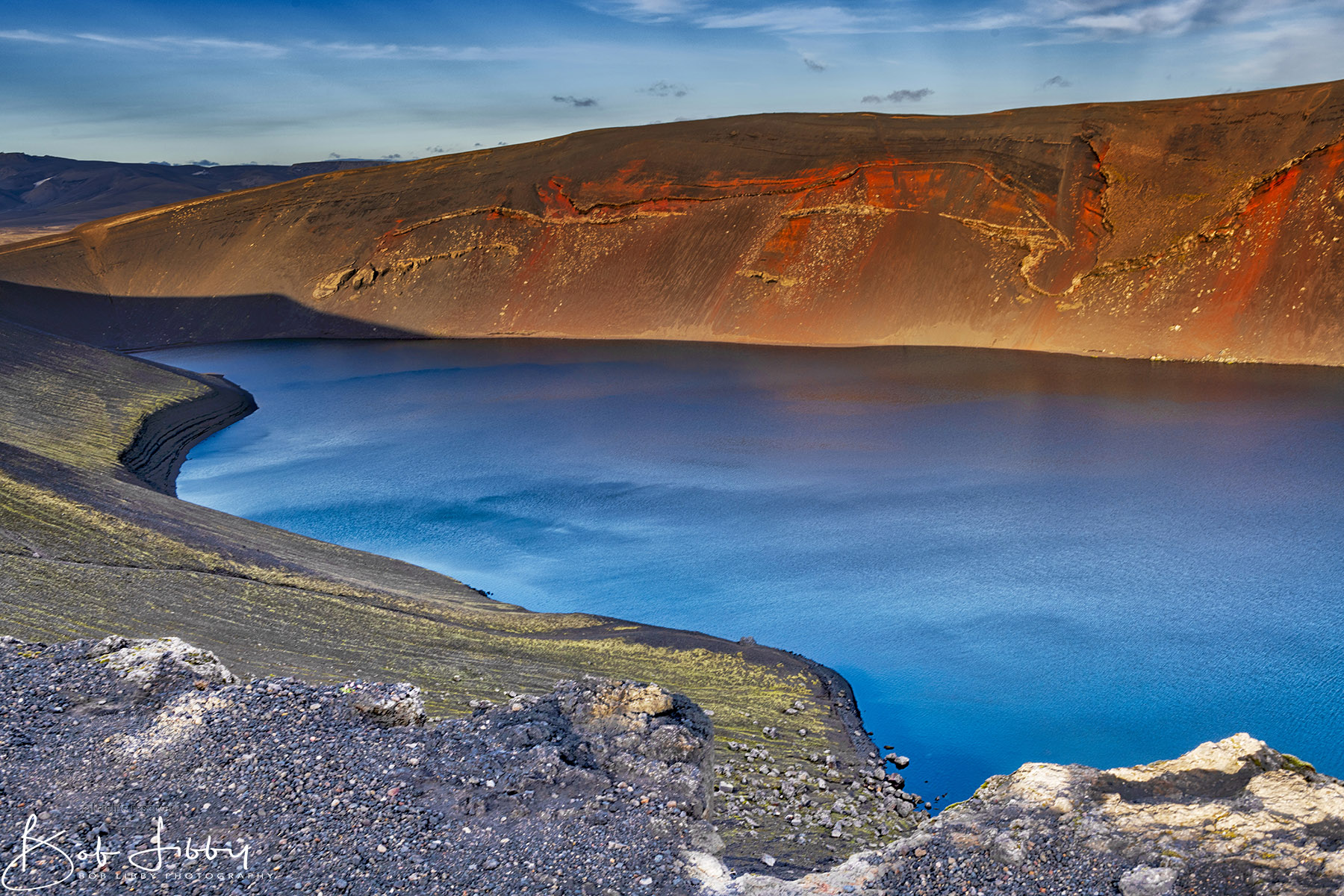 At the top of Ljótipollur, (Crater of the Lake), you get a nice view of the Tungnaá River in the Southern Highlands of Iceland. 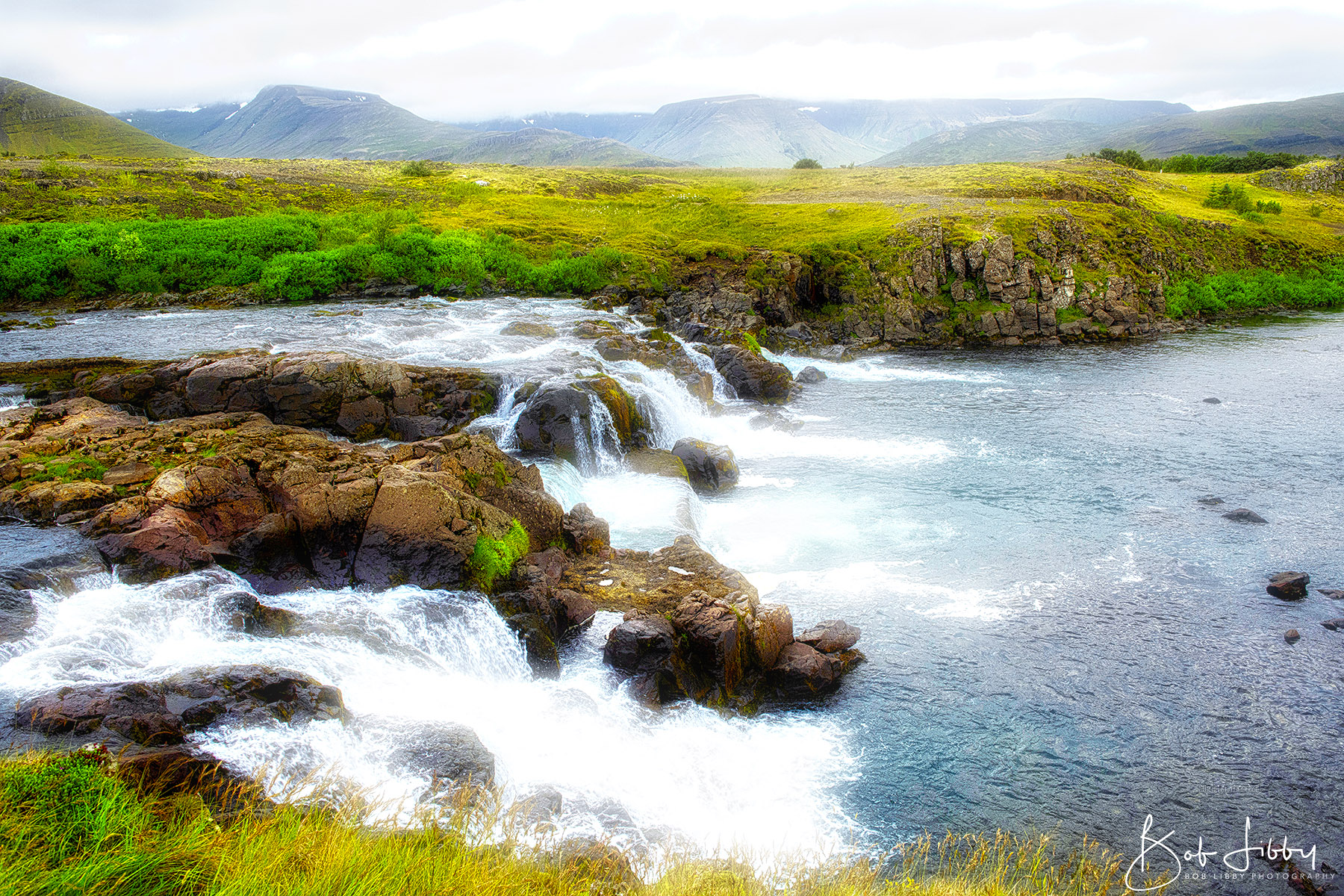 Most anglers have heard about salmon fishing in Iceland. I guess that’s what Iceland is famous for among fishermen all over the world. The Atlantic salmon is considered by some as the “King of Sportfish”. This salmon river is about an hour out of Reykjavik and often the mighty Atlantic salmon can be seen here jumping the falls. 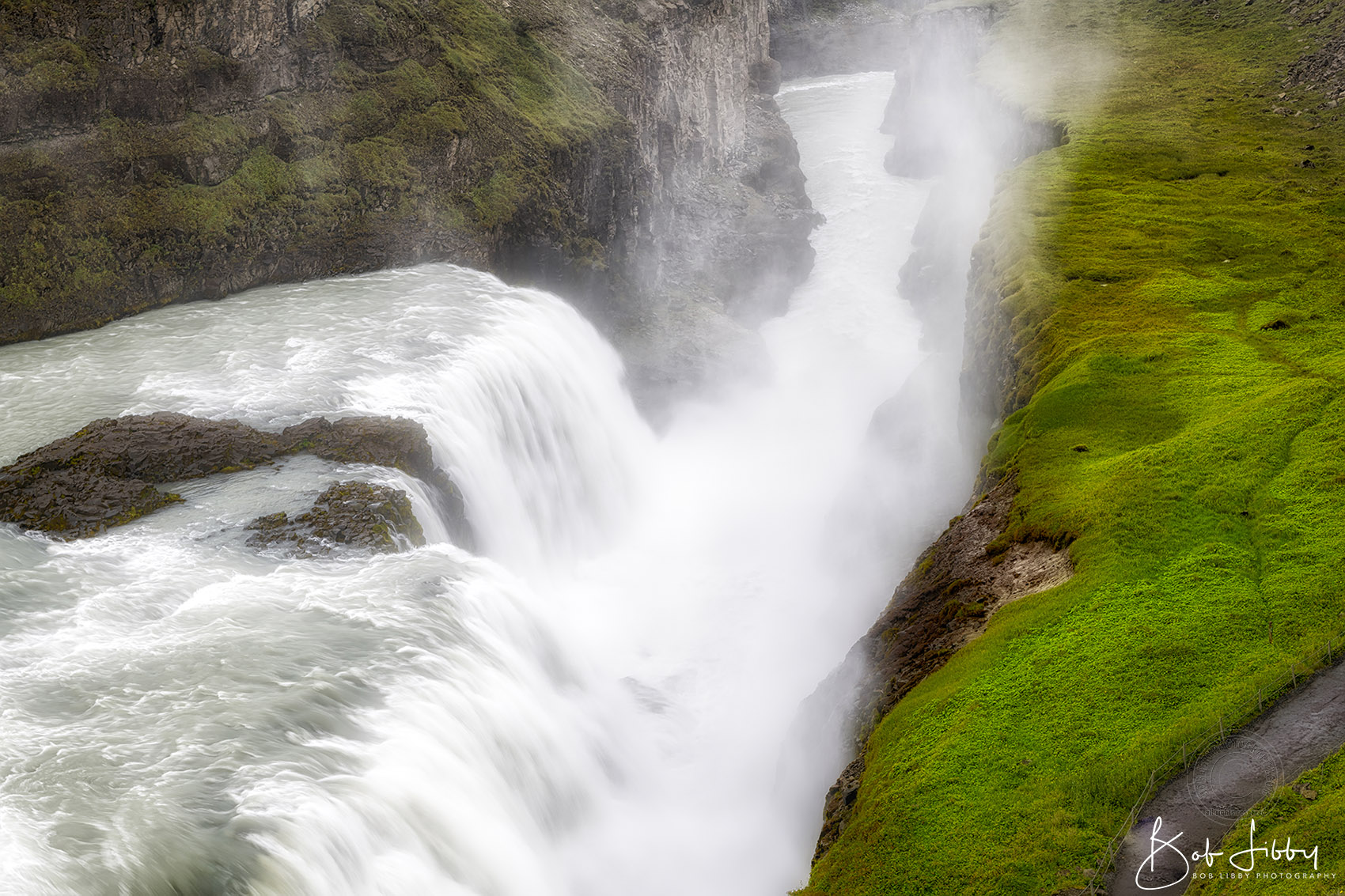 Located about 450 km from Reykjavík, Godafoss waterfall has long been known as one of the most beautiful sights to be seen in Iceland. Located right off the Ring Road no one should let this alluring waterfall pass them by without a visit. There are many different views to photograph Godafoss. We arrived late in the afternoon on a rainy, gale like windy and cold day. There were hundreds of tourists there so because of the conditions, I took the tourist and easy path to the waterfall for this shot. The waterfall, which is often nicknamed the Waterfall of the Gods. It takes its godly connection from an old Icelandic saga of a man throwing pagan statues into the falls when Icelanders had decided to convert to Christianity. https://youtu.be/BWW-nDafxdM I didn’t find Godafoss the easiest waterfall to photograph without spending sometime here to know when and where to photograph. 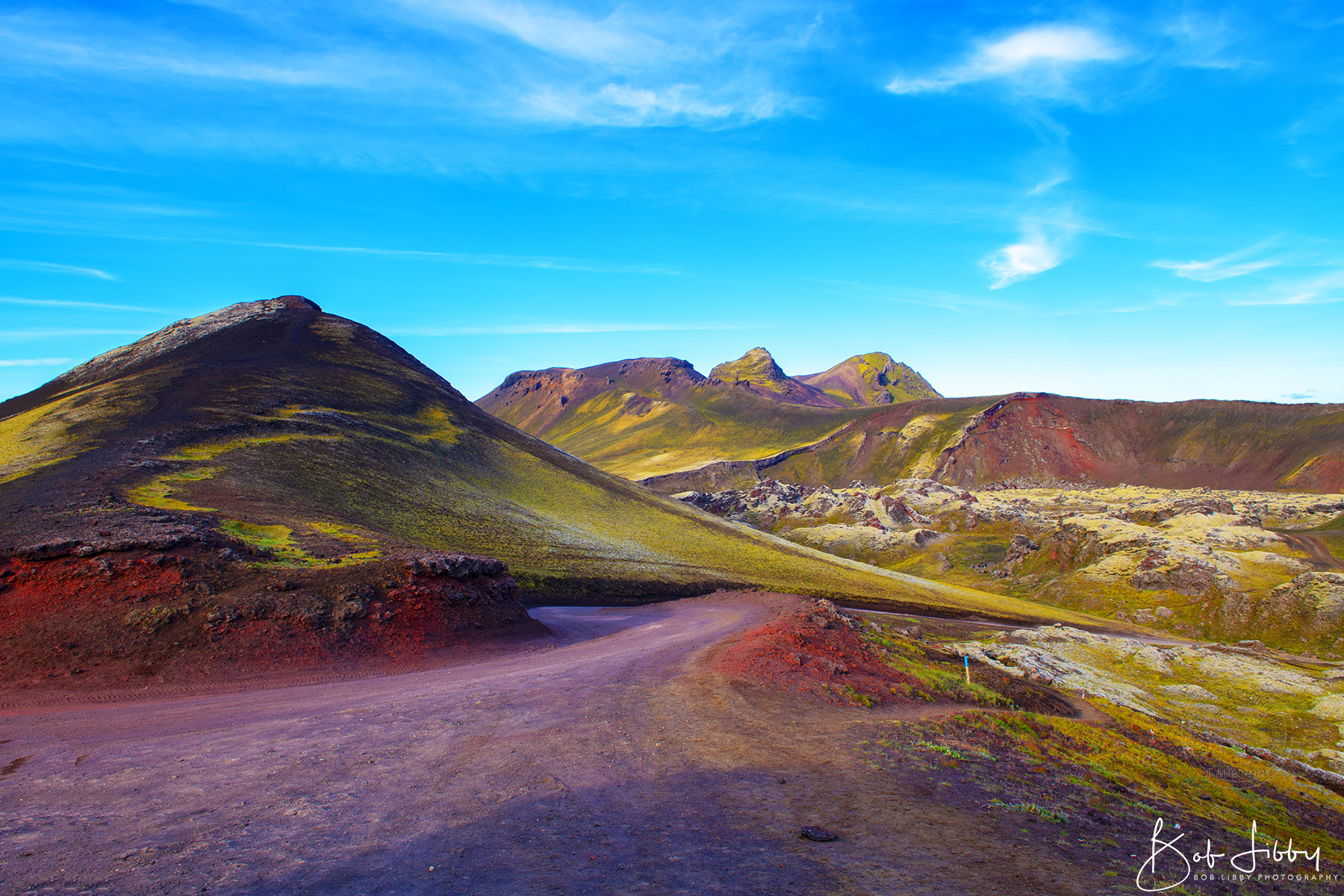 We stopped in the Southern Highlands of Iceland for this colourful landscape photo.The mountain roads in the highlands are called F-roads and are indicated with an F in front of the number of the road on maps. In most cases,you will need a 4 wheeler to drive on these roads. This photo shows one of the better roads but knowing the area and conditions are a must before adventuring out on these roads. The photo below shows the ruggedness, remoteness and natural beauty of the Icelandic Southern Highlands. 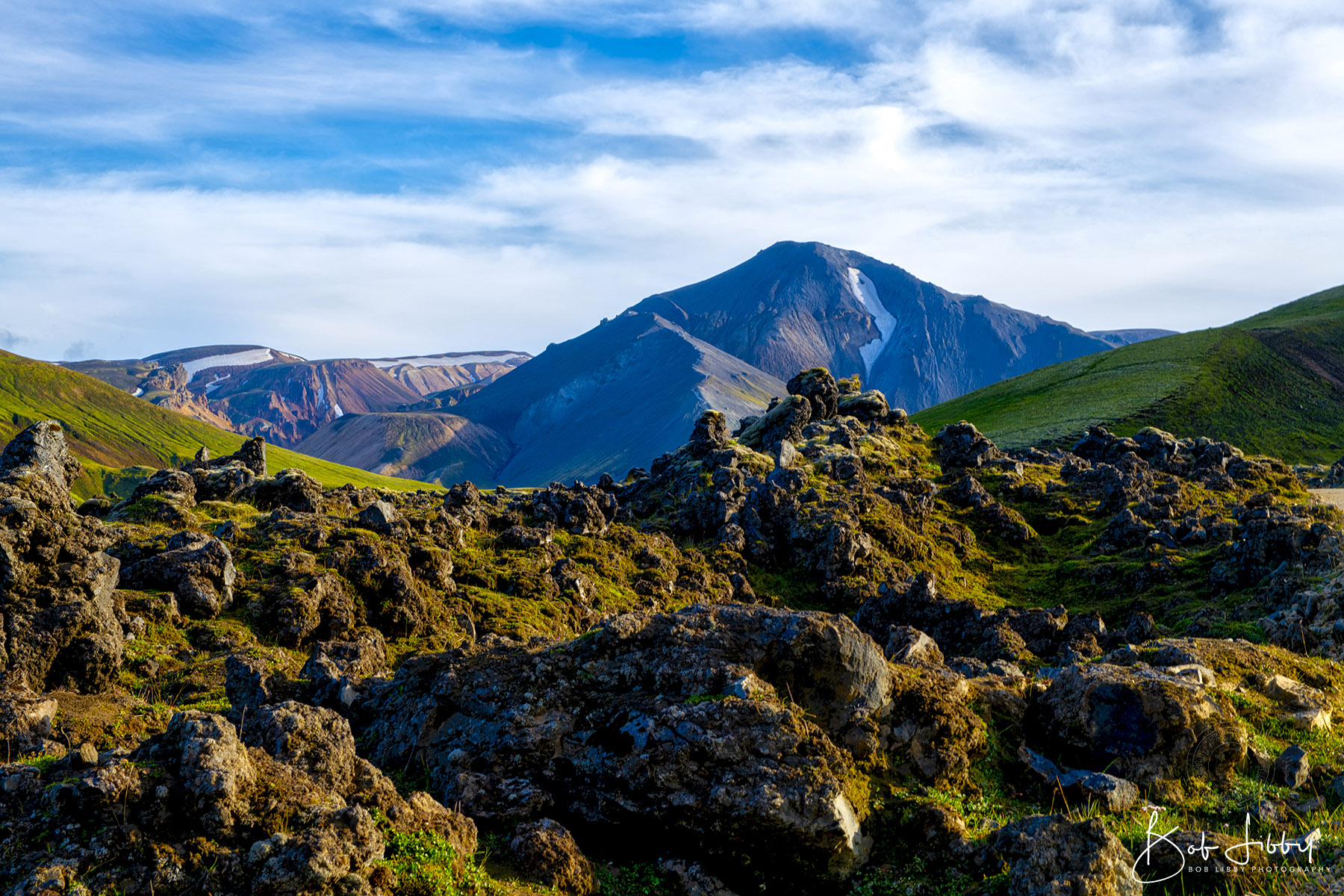 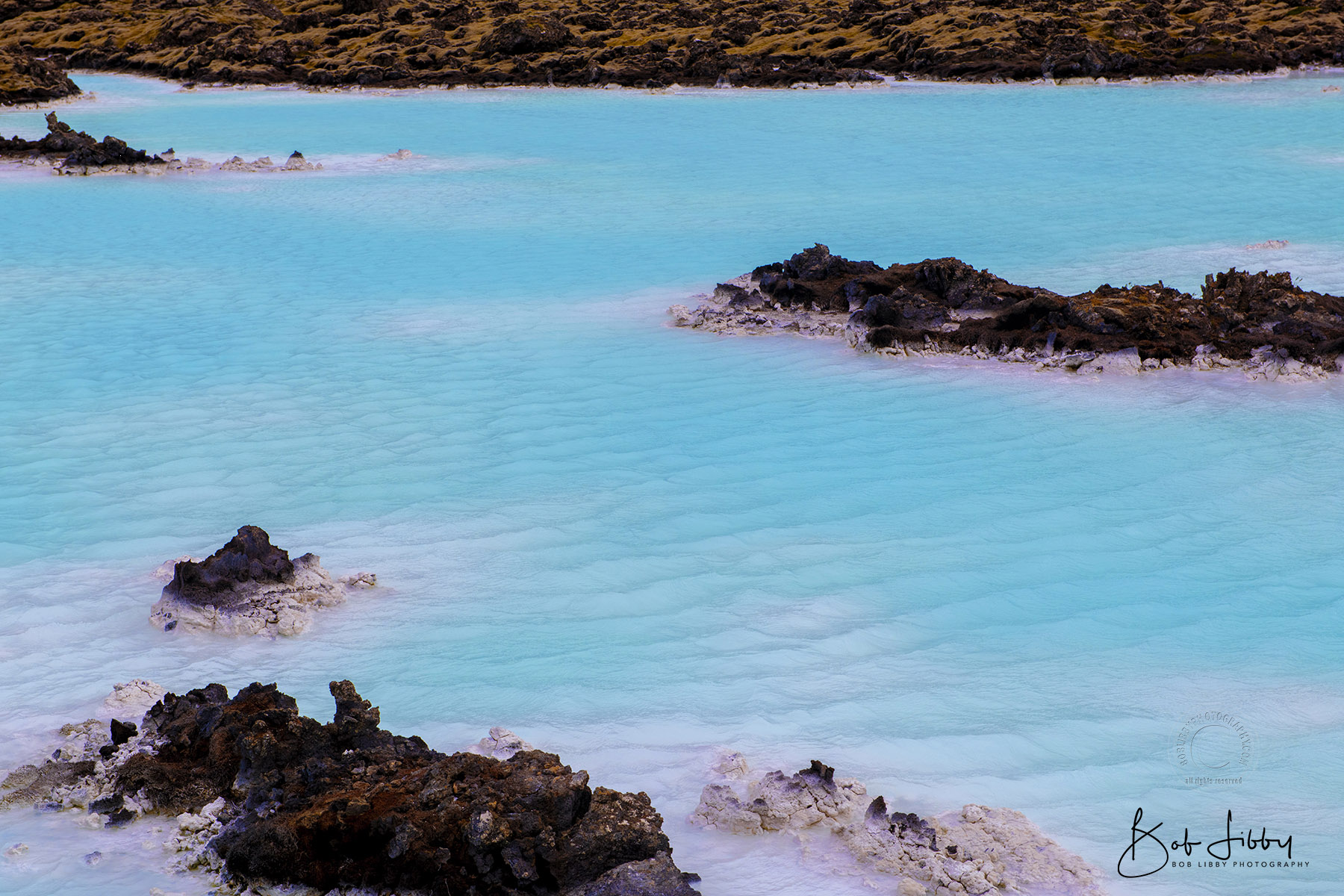 This photo shows an example of the geothermal areas around the Blue Lagoon. The Blue Lagoon itself is situated on the Reykjanes Peninsula in southwest Iceland and is one of Iceland’s most popular attractions. It is little wonder as to why. The beautiful milky-blue water is unlike anything else found on earth, and makes a stark contrast to the surrounding black lava field and its creeping grey moss. It sits at 39°C (102°F) year-round, making it the perfect temperature for bathing. Tourists everywhere! – Expensive! – May or may not be for you! 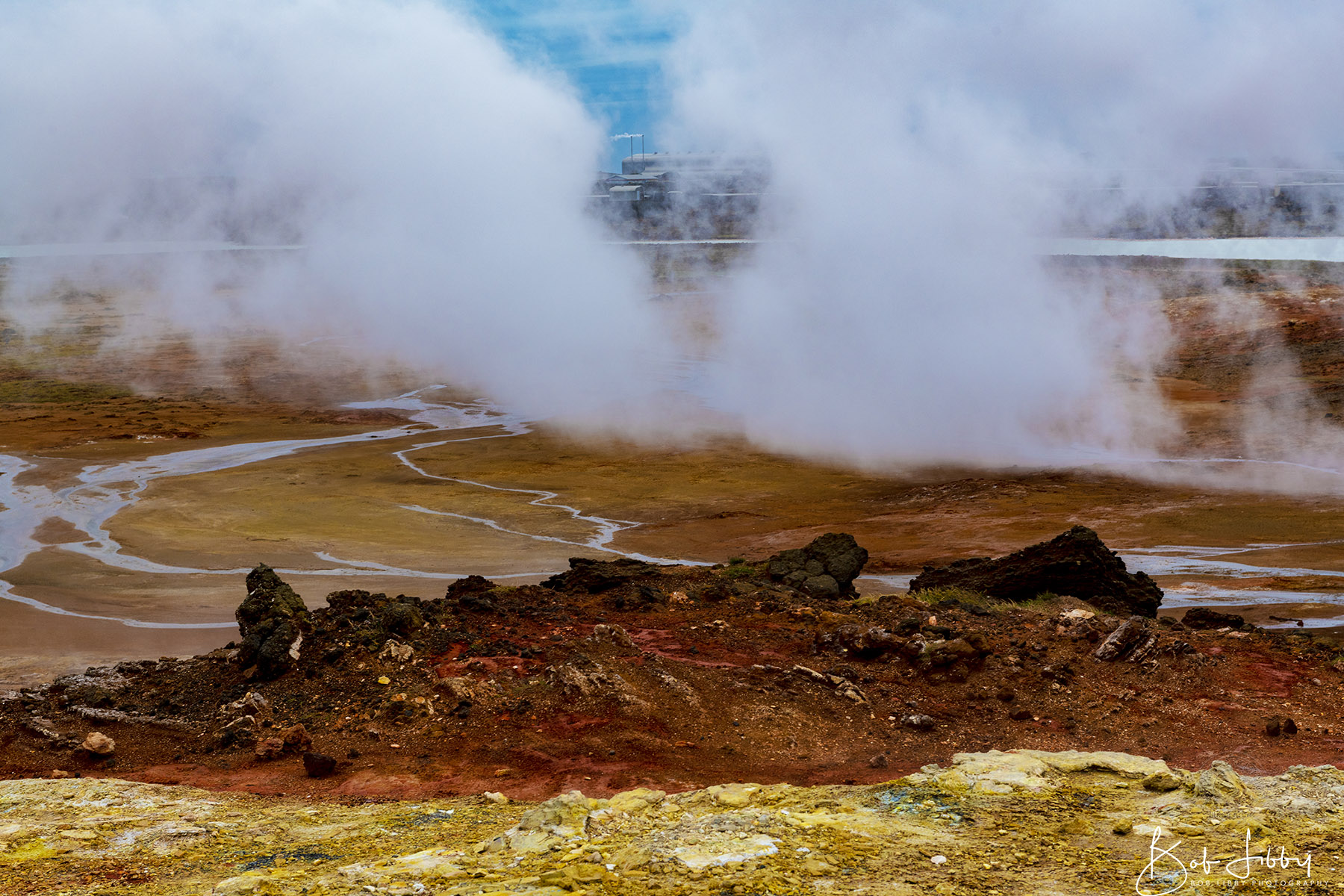 All beauty aside the geothermal areas in Iceland can be very dangerous. With temperatures over 300°C (570°F) coming from those steaming holes it is important to be careful and stick to the trails. Last fall Gunnuhver area had to be closed by the police after hot clay started shooting meters up into the air. 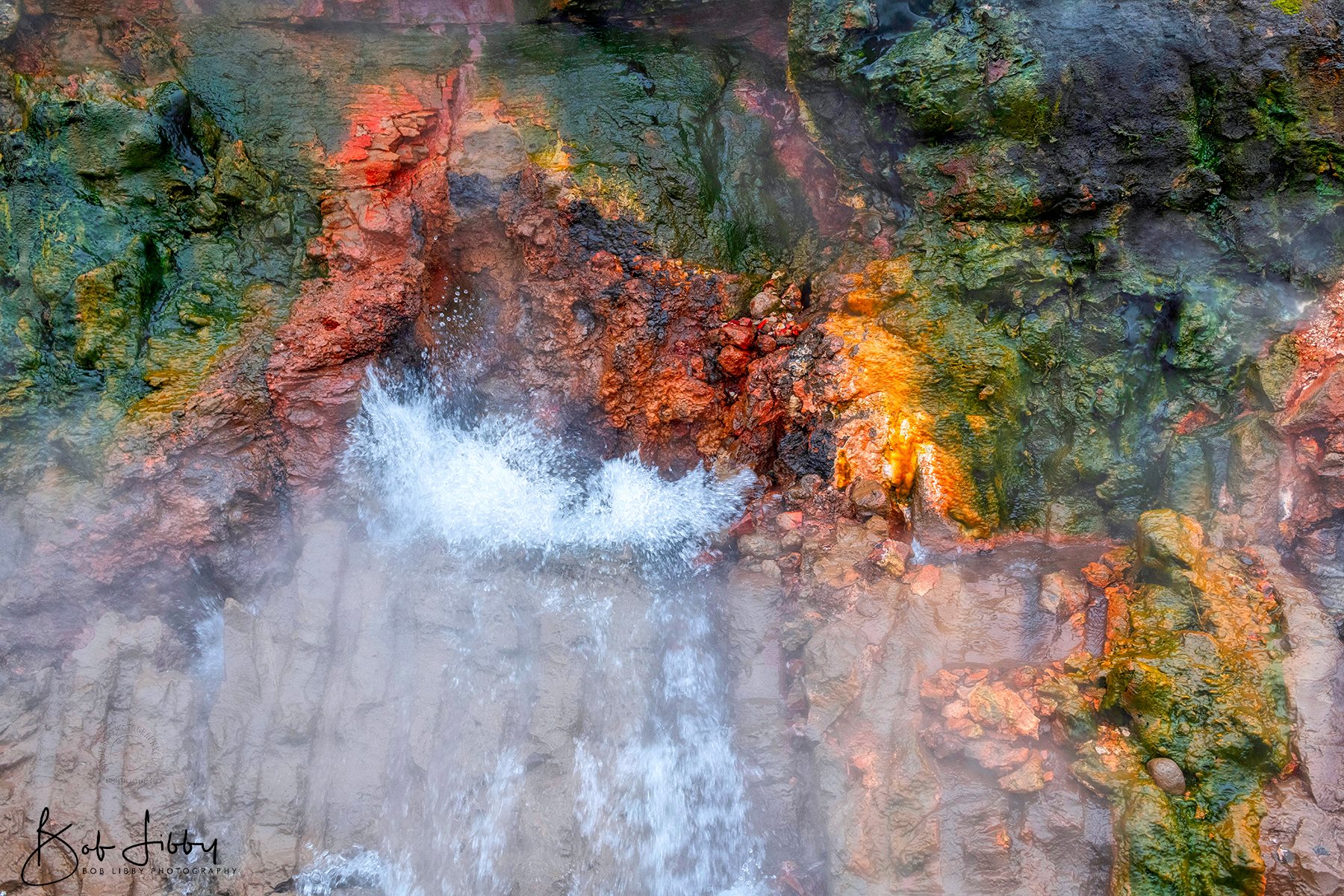 Thanks to Iceland’s many volcanoes, you don’t have to look far to find one of the country’s legendary geothermal pools. Bathing in the steamy waters is a quintessential Icelandic experience.